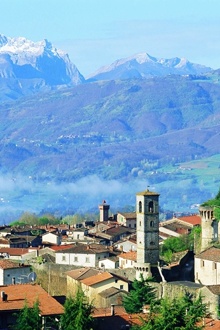 The cluster of stone houses appeared through the leafless beech trees. Wooden shutters were bolted shut and the terracotta rooftops were almost completely hidden beneath a thick layer of snow. The tiny shepherd’s village of Campaiana, high on the slopes of Pania di Corfino in northwestern Tuscany, was quite deserted.

We added our own tracks to those of the fox that had recently passed through, our snowshoes crunching and swishing along pathways that took shape in the Middle Ages.

Campaiana — and much of Tuscany — comes alive in the warm summer months, but it is almost deserted in the winter. “Everyone comes during summer,” said Ben, our hiking guide. “Most don’t consider it a winter destination. They don’t think about the mountains, the snowy walking trails, the crackling fireplaces, rich red wines and roasting chestnuts,” he added as we followed a gushing stream to a pool known locally as Fonte dell’Amore (“Fountain of Love”). We paused at the spot where canoodling couples are often spotted sipping the water in the hope of eternal love. There was no such romance on this cold February morning; the sub-zero temperatures saw to that.

Our 10km (six-mile) walk through the rugged Apennine Mountains continued to the summit of Pania di Corfino. At the top of a steep ridge, a large wooden cross stood watch over the fertile Garfagnana Valley 1,600m (5,250ft) below, a patchwork of fields dotted with tiny medieval villages.

Once one of the most important and fought-over valleys in the region for its easy passages across the mountains, its towns were regularly under attack by feuding armies. The city states of Lucca and Pisa engaged in a bloody quest for territory until the 14th century. The rivalry still exists, although these days it’s confined to the football pitch.

However, it’s not just Garfagnana’s location that won it so many admirers. Michelangelo used marble from the Alpi Apuane and was particularly taken with Monte Altissimo.

The roaring log fire was crackling loudly upon our return to Le Casine di Braccicotri, a former barn turned cosy farmhouse in the quiet village of San Romano. Surrounded by vineyards and forests of oak and chestnut trees, it belongs to the Giovannetti family, who live upstairs with their young children. Guests stay in the two downstairs bedrooms and chalets scattered around the ground’s 11 hectares (27 acres), all kitted out with chestnut beams and antique Tuscan furniture. The six-hole golf course and outdoor swimming pool are best suited for summer visits. Meals — home-cooked, rustic and delicious — are enjoyed together around the large dining table in a living room painted in the same shade of yellow as the home-made limoncello served after dinner.

Another long walk awaited the next morning, although this time at lower altitude. There was no need for snowshoes on our 12km hike along the valley floor but rain macs and brollies proved essential. Wispy clouds hung low, obscuring the foothills before darkening and dispensing heavy downpours.

Our route took us through hushed woodland, where the spindly branches were studded with small clumps of snow that sparkled. Among the bright purple crocuses along the mossy trail were porcupine quills, each dark and pointy. These nocturnal creatures were introduced by the Romans as a source of food 2,000 years ago, a delicacy still enjoyed today, according to some.

Of course, the Romans weren’t the first to become enamoured with this patch of the Tuscan countryside because they were predated by the Etruscans. Prehistoric tombs found in the surrounding mountains and caves, meanwhile, reveal that the region was first inhabited during the Stone Age.

Its medieval past was clear to see in Castiglione di Garfagnana, a fortified town built by the Republic of Lucca in the 14th century; the red and white flags are still proudly on display. Smoke billowed from chimneys while old men carried groceries under crumbling stone arches and along cobbled pathways peppered with green lichen. A handful of the 1,800 residents, however, were enjoying the strong coffee and chestnut-flavoured beer inside Marcalli e Piagentini.

Adriano Marcalli was busy serving up espressos and cutting thin slices of salty Tuscan salami for the hungry locals gathered at the deli counter. “Winter is special here,” he said. “ It’s quiet with no tourists, a time when locals reclaim their home.”

Several hours later we found ourselves beside the fire at our farmhouse. Our hostess’s father — a garrulous chap by the name of Bruno with a gap in his front teeth and a tuft of grey hair — stopped by with a little treat. Clutching a large bag filled with freshly collected chestnuts, he set about roasting them in the blue-tinged flames.

The woody aroma of burnt chestnuts slowly filled the room, as did Bruno’s tales of decades gone by. “Tuscany hasn’t changed much in all that time,” he said. “Its spirit is still the same and I still find beauty in these hills and mountains.”

Nick Boulos was a guest of Explore Worldwide (01252 884286, explore.co.uk), which offers a seven-night snowshoeing and winter walking holiday in Tuscany from £899pp. The price includes farmhouse accommodation, transfers, equipment, guides, most meals and return flights from Gatwick.

Walking in Tuscany: great trails and the best places to stay

This 15th-century farmhouse, 8km from Florence, sits within the gentle hills of Fiesole. The surrounding meadows and oak forests offer easy walking routes to family-run wineries and ancient Roman villages. The 45 individually decorated rooms are adorned with striking Tuscan art, including frescoes from the 1880s by Domenico Bruschi.

Close to the medieval village of Montalcino, this five-star property has its own thermal spa pools and offers complementary picnics and walking tours along some of the 200km of marked trails just beyond its doorstep. Want to do it yourself? Then download the hotel’s app, which details routes and local highlights. 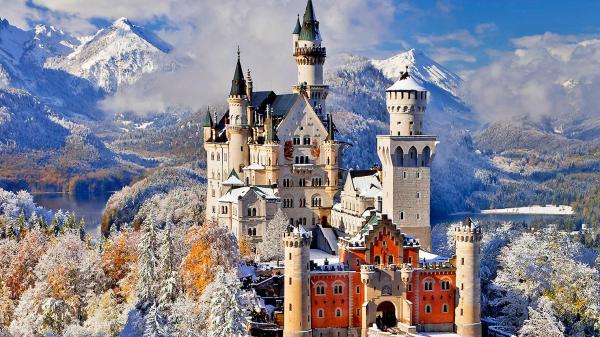